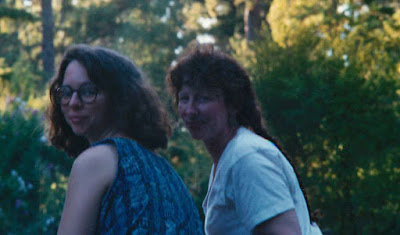 This is Part 3 of our blog series sharing excerpts from our memoir, Kathleen~Cathleen. Last week we shared an excerpt from when we were first transitioning from Honeymoon into a harder time in "Going Dark - Sundown." Here we go darker, and realize there's more to reunion than meeting and going our separate ways.


Below is my excerpt from the Going Dark chapter of the memoir, titled "Deepening" (then read Kate's "Deepening" excerpt at mothertone).

Things with Kate were starting to get tense. It had been over a month since I arrived in Portland and I wasn’t finding work. I could tell that it was starting to wear on our relationship. I had come to Portland with only the $300 that I had gotten from my graduation party and that was nearly gone. I noticed that Kate would stomp out on her way to work in the morning, making it clear she wasn’t happy that I was still asleep. But I reasoned I was no more guilty for sleeping in when it was both of us at the tavern til all hours.

So the day that I went out and finally found a job bussing tables, I practically skipped back to Kate's apartment, filled with relief and eager to share my downright glee.

It was 9 o’clock by the time I reached the front door. The apartment was dark and the doors that separated the front room from the rest of the house were shut. I figured Kate had gone to bed early, catching up on her sleep after the night before. As I quietly put down my bag, I found a white card envelope on my pillow with “Cathy” written on the front in Kate’s handwriting. It reminded me of our years corresponding by letters when I was in college. I was touched that she would leave me a note when, here, we saw each other every day. I hoped that - like the new job-  it was a sign that things were getting better.

I opened the envelope to a card with a goldfinch on the cover. As I turned to the inside of the card, I found that this was no love note. I read in the card that Kate had just received the phone bill and it had over a hundred dollars in calls back to the east coast. She went on to say that she didn’t have the money for this, pointing out that she had given me money on more than one occasion, and that I needed to pay her back at once.

I sat staring at the words, my head swimming with it’s implications. Yes, I had been calling back home... to my boyfriend, my parents, my friends. I had been lonely, and the calls back east grounded me. I had always asked permission to use the phone, explaining that I would pay her back as soon as I got a job, and she would wave me off, saying it was no problem.

Over the past month , she had loaned me money here and there, and I gratefully took it, not realizing it was a hardship on her. It was the kind of thing parents, or even a fond aunt or uncle, do. I hadn’t thought much about it. My parents had always paid for everything. When I accepted the invitation to come to Portland, I had no concrete plans on how I would pay for things, I just trusted that everything would work out. But here my trust was being broken. I knew that things weren’t working out between us at all.

I was horrified that I was a burden. I wouldn’t have taken her money or made the phone calls if I’d known it would be a problem. Why hadn’t she just told me?

I put the card down and started getting ready for bed, trying to push down my feelings of shame. But, as I turned out the lights, I felt anger building up in me. Why was I being punished for breaking rules I didn’t know existed? Here I was with the verdict in hand, for a crime I didn’t know I had committed. Why had I trusted her, why did I think this would work? It was obvious she didn’t want me there - after all, she had never wanted me - and this was the proof. I tried to put the card aside and go to sleep, telling myself I would sort it all out in the morning, but I couldn't reconcile the feelings of shame mixed with fury.

The next morning, I heard Kate close the back door on her way to work. I got out of bed and used Kate's phone once again. I called my parents to ask for money. I didn't tell them why I needed it, what it was for. I tried to keep my voice steady.

I was disappointed that I had to fall back on them, that my maiden voyage to independence had sunk, but I felt immensely grateful that they would take care of me without question. I was free to make mistakes with them, knowing they would love me no matter what.

Later that morning Kate called, asking innocently if I had gotten her note. Steeling my voice, I said that I had, that I had gotten a job the day before, and that I had also asked my parents for a loan, so she didn’t have to worry. She apologized then, explaining that she’d had a bad day and had just gotten the phone bill. I said it was fine and hung up.

When my parent’s check arrived a few days later, I immediately brought it to Kate, signing it over. She took it without apology.

Now I didn’t owe her anything.

***
to view my birthmother's blog on the same topic, go to mothertone