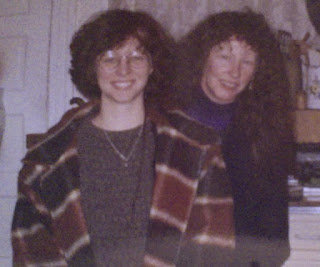 Here we share Part 6, the final installment in this series on our blogs sharing excerpts from our memoir, Kathleen~Cathleen, that we originally read at the American Adoption Congress Conference in San Francisco in 2014.

Last week in “Therapy,” we wrote about what it was like to expose our deepest feelings and thoughts to each other, giving us new perspective on the core of our reunion experience and fueling our desire to continue.

One day Tracy had found me in the copy room alone, and told me that she found out about a support-group for adoptees in reunion, that she was going to go and would I like to go too. I hesitated, explaining that I had been through it all already: Kate and I had been through therapy, I had resolved everything. Thanks anyway! but I didn’t need any more. The truth was that the thought of doing any more “work” around reunion gave me stomach cramps. Tracy offered that I could be the voice of experience for the group, and that she would like it if I went. I said I’d think about it.

I was blown away that there were enough adoptees “in reunion” in Portland to have a support group for it. My curiosity got the better of me so, I agreed to go, making the disclaimer that I would be more a spectator than a participant.

There was a charge just sitting in the same room with everyone the first night. There were a couple other women besides me and Tracy and one guy. When I’d met Tracy, I was amazed to know someone else in reunion, now I was in a room full of them.

The therapist was a birth-mother herself. I had wondered if that would be awkward – she was on the other side, afterall -- but within the first five minutes of the session I was sold. Sharon said more about the experience of reunion in her introduction to the group, than anyone had ever said to me in my lifetime.

She explained what we were going through so succinctly, so dead-on, that I was astounded at her insight. Then I noticed the others nodding as well and I commented on how great it was to have people know what you’re feeling. The guy in the group explained that it was like talking in short-hand. Having been in individual counseling with the therapist already, he had experienced it before – once you’re among people who all are in the same experience, you don’t have to explain yourself in the same was as you would to someone on “the outside.” Things that seemed cruel or vulnerable to the outside world of people who weren’t adoptees could be talked about openly and freely here.

In Kate’s new house, we would sit down in the tiny kitchen to conversations over tea like we had in the old apartment. Even though the ritual was the same, the content and the depth of conversation was different. It felt like level ground. She didn’t have the responsibility of being my mother and I didn’t have the obligation of being her daughter, we were more equals.

Now, I was able to call Kate out if she did or said something that bothered me, which was something I wasn’t able to do before. And, when I confronted her with it, Kate would listen and respond instead of overreacting and blowing the situation out of proportion.

Whereas before I would push back if Kate tried to do nice things for me, now I would allow it, and enjoy it, knowing that it was an indulgence for her as much as it was for me, and not a power-play or a way of exerting ownership over me.

Life with Kate had settled to a sort of normalcy. We would see each other frequently – get together for dinner, chat about what was going on in our lives.

Being in each other’s lives was beginning to feel more natural; we were starting to become comfortable in the roles we had in each other’s lives. I still couldn’t quite define in a simple word what Kate’s relationship was to me. She was like an older friend, someone I could confide in about what was going on in my life and get direction or advice based on her experience. But because she understood me, that we understood each other, in a way that was deeper than friendship, that arose from our kinship, I knew our relationship was something more.

Another thing that was different is that she loved me in a way that was more than friendship – she loved me like a daughter. She thought that I was just the most fabulous thing on the planet and that of course I would succeed, and of course I was wonderful and of course I could have anything I dreamed of. I let her gush and I let myself enjoy it, and even, sometimes, believe it.