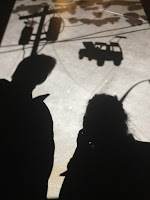 Below is Part 4 of our blog series sharing excerpts from our memoir, Kathleen~Cathleen.

Last week in “Going Dark - Deepening,” we shared an excerpt that described the challenges as we navigated our inexperienced reunited relationship and grappled with the distance that grew between us.

The alienation in our struggle comes to a peak in "Going Dark - Dusk," and forces us to face what we fear most.

Below is my excerpt from the Going Dark chapter of the memoir, titled "Dusk" (then read Kate's "Dusk" excerpt at mothertone).

By October, I was done. We had had our “Summer of Reunion.” As the sunshine gave way to the gloom of Portland’s autumn, I, too wished I could so easily transition, out of my relationship with Kate, and onto the next phase of my life, without her. While in the warm months I would gladly dash off to meet Kate for a spontaneous lunch in one of the lush green parks of Portland, now I found myself plotting how to get out of the the grey rain, and into my apartment, without her noticing me.

We were still living in the same building, but now in separate apartments. A couple months earlier, Kate had said that she felt my stay had run its course. It stung. I felt like I was being rejected by her once again.

And, I wasn’t ready to leave. I had unintentionally fallen in love - both with Portland, and with a handsome young Irish musician. Not ready to leave Portland, but not knowing where to go or what to do, I accepted the apartment upstairs as soon as it came open, moving in with the musician, now my boyfriend of two months, as a way to afford the rent.

Since I was still in Portland, Kate seemed to think that I was here for her. But that was over. This was my new life. Yet, Kate’s ceiling was my floor. I felt stuck like a fly in a spider’s web, having flown directly into it by my own choice, without knowing I wouldn’t be able to get back out.

As I came home from work one evening, eager to relax into the arms of my boyfriend, I crept into the house like a teenager coming in after curfew. I opened the heavy wooden front door, grimacing at its creak, and shut it silently behind me, turning the handle as it closed so that there would be no “click”. But, the staircase was just outside of Kate’s living room, so, when the step squeaked, Kate popped out like a jack-in-the-box triggered by the stair.

“Hey, there’s a concert at the Clinton Street tonight, I thought you might want to go.” Kate said cheerfully, acting as though nothing had changed between us. I didn’t know why this person that I had found so enthralling, now repulsed me. Nothing about her had changed, but how I felt was completely different.

I didn’t want to go to the show, it was the last thing I wanted to do. Music had been one of the most magical aspects of my reunion with Kate. Seeing her play songs she had written, surrounded by a vibrant musical world, had felt like stepping into a world that had previously been invisible to me. But now the music just glared a spotlight on how different we were. She was a musician, I wasn’t. My adoptive parents weren’t musical so I didn’t grow up around music. And although I had taken piano lessons, it was like being taught a language different from your parents native tongue. I hadn’t known that it was part of my heritage, so I had no clues as to how to pursue it for myself when I was younger and could have made it part of my life, too. Now I had a different life, the one she chose for me.

I told Kate that I didn’t want to go to the concert, but said I would drive her there. A month earlier, Kate had given me her car, an old red datsun hatchback. It was such a generous gift, exactly what I needed for my new life in Portland, but it also infuriated me. It was a gift I couldn’t say no to and it made me feel like she had a claim on me, and yet her generosity endeared me.

It was already dark when we left, and still pouring rain. I didn’t bother making small talk and was glad that Kate was unusually quiet as well. As we pulled up at the theater, Kate turned to me and asked what was going on. She said I was being distant, that she never saw me anymore, that I was closed off.

I was going to say she was imagining things, that everything was fine, but I couldn’t, it would be a lie. I was still sitting there waiting for a response to rise up in me when Kate got out of the car. I just couldn’t find the energy to tell her to, please, just leave me alone.