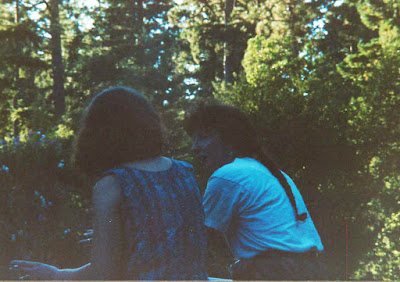 I've been away from the blog for awhile. I've been working on finishing up a my Master's degrees while working full-time. Oh, and moving my adoptive mom across the country into assisted living near me. There's a lot going on. I look forward to writing about it more in the months to come as my studies transition away from MBA and into writing. I've missed it.

Even though I've been away from writing, I have still been scanning posts about adoption. What's been sticking with me lately are stories of initial reunion.

It seems so long ago when reunion was new to me. It's strange to think back on it now. As I read other's stories, I remember the feeling of gratitude at finally knowing about where I came from, the relief at confirming that I was indeed human and had not just appeared out of the ether, and the uninhibited joy of an unprecedented connection that I never had before with anyone else, ever, in quite in the same way.

As I see pictures of initial reunions and the smiles, I miss it. The newness of it brushes past me like a warm summer breeze. Everything is bright, and new, and the darkness of not knowing seems a distant memory.

While allowing the peace and joy of the initial reunion, I know that the reunitees don't quite realize that their lives have changed. I know I didn't. I didn't think that one bit of knowledge would actually be a doorway to a whole new dimension. And once you cross that threshold, you know it's out there. You can turn around and shut the door, and I know some people do that, but you still know it's there.

Old reunion is living in both spaces. The newly reunited may not know there's a whirlwind to come. And it's okay. They deserve the unbridled joy. It's part of it. Living with both. Getting to have the good and the bad.

Sometimes when I'm in a hard phase, it's helpful to remember back to the time before knowing. The time when I wasn't in reunion. I was half the person I am now. I'm grateful for all the family I have now, the extensive massive family I have now (both original mom and original dad have hoards of siblings, plus have married into other families). I'm glad to have gone through all of it.

And so looking back on the new reunions is sweet and refreshing. They have crossed over. Those of us who have been in old reunion welcome them into our fold and hope we can be of some help along the way.

Kate moved back to Portland last year, on January 27, after having left about five years ago. It's been exactly one year since she's been back.

Those who follow our blogs know that it hasn't been a smooth transition for us. It brought up a lot of negative feelings for me that I didn't understand. While we have been in reunion nearly 27 years, I have to say this has been one of the most challenging years of reunion for me. I still can't explain exactly why.

Maybe part of it was starting graduate school just before Kate moved back. With work, school and kids, I was at capacity and couldn't deal much more of anything, much less the complexity of reunion.

Part of it could have been that being involved in the writing collective of the Lost Daughters. Being part of that group brought up aspects of adoption and reunion that I hadn't thought about before; it challenged my beliefs and triggered deep feelings about the rights of the adoptee that I hadn't acknowledged before - like the rights of the adopted person, the needs of the child. It made me angry (and that's not a bad thing). It made me aware (and that's a good thing). It made me conflicted (and that's the hard thing).

But most of what made this past year so hard was about fighting the natural fight-or-flight I feel when I come face-to-face with my reunion. Because facing my reunion means facing my abandonment. Seems obvious enough as I write the words down, but I am so loathe to admit it. Although Kate was returning, not leaving, having her back here, and having that connection, is what stirred up the  furies in me.

Like many adoptees, I am fiercely independent. It's a fight to get close to me, as my husband will attest to. I can love someone, I just can't need them. I am resistant to admit needing anyone, much less the mother who relinquished me. I can, and will, make it on my own. And yes, it seems an obvious defense mechanism once you realize that an adoptee is the denied the one they need the most - their mother. Of course they would learn to defend themselves against needing that, or anyone.

I survived the first 18 years without my birthmother, so I was fine to survive without her again.

So, when Kate left, it was okay. Maybe I expected it on a subconscious level. We'd had many years living in the same town, being an active part of each other's lives, something that most adoptees in reunion don't get to experience, so I counted myself lucky for the time we'd had.

But then when she returned, I felt chaotic, like my world was shattering.

When she left Portland, I returned to a less connected reunion. One of phone calls and visits and emails.

But, LIVING in reunion is different. Living in the same town,  you can't compartmentalize and have adoption and reunion be just a part of who you are. Because all sides of your family are part of your life, you're always exposed. Being adopted and in reunion is revealed every time I introduce my birthmother or step-birthfather. I don't get to compartmentalize it, I don't get to just pretend adoption isn't a big glaring part of my life.

But, in a way, it's freeing. You have to live your full self.

And, sometimes that's complicated, and painful, and kind of sucks.

But, most of the time, it's good. To have our relationship, and reunion in general, be mostly good - with some crisis points of really bad - seems like a fair enough balance.

So that was a really long way of saying, we're doing okay now. Still edgy, still felling like we're on shaky ground, but mostly good.