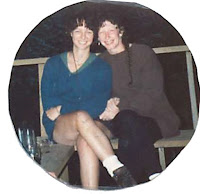 Below is Part 2 of our blog series sharing excerpts from our memoir, Kathleen~Cathleen. Last week we shared an excerpt from "Honeymoon," which gives a glimpse into the joy of coming together. However, all honeymoons come to an end. In "Going Dark - Sundown," we take the first steps into the darkness and confusion that are an inevitable part of reunion.

Below is my excerpt from the Going Dark chapter of the memoir, titled "Sundown" (then read Kate's "Sundown" excerpt at mothertone).

I had just started telling Kate a story about getting caught sneaking out of the beach house when Kate suddenly broke into tears. She jumped up from the table and walked from the table into the kitchen, shaking with sobs. She came back towards me, struggling for words, but would then turn away again, too upset to get the words out. I was baffled. What had I said? I replayed our conversation in my head and found nothing in it that should have upset her. We were talking about my family, the Jersey shore, nothing special.

“I’m sorry,” she said, choking the words out through the tears, putting her hand on the stove for support. “Even if your child were raised by angels, it’s still hard to let them go.”

I was stunned. It was the first time I had seen Kate express any regret. Up until then, she’d always discussed giving me up as being the best decision -- not only for her, but for me. She had been so young and she’d wanted to give me a better life. It made sense.

I had accepted her explanation. After all, it was a familiar chorus from people while I was growing up: “It was for the best,” they’d say - whether coming from friends, or relatives, or strangers. I was raised by two loving parents in a stable household without divorce. My dad was a chemist, my mom a housewife, and I had an older brother, also adopted. We were the ideal nuclear family. We would go on family vacations, I was a girl-scout. We never moved, I never had to change schools, I had the same friends all my life.

If I had been raised by Kate, my life would have been unstable. After all, she had been so young, certainly not prepared to raise a child. She would have been a poor, single mom, or with a man that wasn’t my father, or living with her parents bringing shame to the family. I should be glad I didn’t have that life.

Yet I started to realize that I wasn’t glad that she didn’t keep me. Hearing Kate’s confession and seeing her tears, I felt loved. Rationally, I knew that Kate had made the mature decision in giving me up for adoption. She was able to get back to her life and I was raised by people who wanted me. But that’s what had always nagged at me quietly in the back of my head: She didn’t want me, why didn’t she want me, what was wrong with me?

Even if my life was better because she gave me up for adoption, I still wanted her to regret having done it. I wanted her to have wanted me, even if it wasn’t wise or “for the best”.

Growing up, no one ever mentioned the things you would miss, only what you gained. It was as if that, by not mentioning the obvious loss, the child wouldn’t know what they were missing. After all, it’s just a baby. What do they know? I was starting to suspect that a baby knew a lot more than it has words for. By the time the ability to form words finally develops, they’ve already been told what to believe.

I went over to Kate and gave her a hug. I hoped the hug held the words that I wasn’t willing to say outloud. I would have liked to say, “Good. You should regret it.”