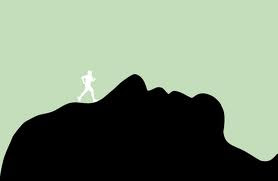 Last week while I was writing, I contacted college friends through facebook to ask some logistical questions - names of bars mostly.

What was interesting to me is that I'm finally at a point where I've been working on this for so long that saying, "I'm writing a book..." no longer felt like a big to-do. What I mean mostly, is that I didn't feel the need to justify it or explain it or get into it. I felt secure enough with the concept to just say, "hey, I'm doing this thing, can you answer some questions for me." I no longer have to justify it to myself. I no longer need to convince myself that "I'm a writer." It's not about that. I'm writing, for better or worse, I'm writing and that's just the way it is.

It also made me realize that in writing a memoir (now I guess, "true story" is the preferred term), I'm going to be saying lots of things about lots of people, and that not everyone might be thrilled with the idea of me writing about them. Friends, old boyfriends, and so on - I'll have to explain to them about what they're in and what they're not and hope they're okay with being part of my story. It's hard enough admitting all kinds of things about myself. But talking about other people - good, bad and indifferent, feels a little much.

The one person that I'm talking the most about, of course, is Kate. We've talked extensively and repeatedly about the danger (and thrill) of writing completely honestly.

We agreed on the outline many (many) years ago and started writing on those events. And we had an agreement - she doesn't see what I write, I don't see what she writes, until we're "done," (and it's been fun trying to figure out  We can ask a logistical question, like, "was so-and-so at that party?" But even then, we try to keep that to a minimum.

I think that this project is interesting on so many levels. One is just trying to delve into two people's memories of the same events. It will say so much.  is the obvious and the impetus of the book: what is reunion really like from the perspective of the birthmother and from the perspective of the adoptee? What is the impact on their lives? Why are the implications?

But, crap, is it a risk. Kate's an established song-writer, so, let's face it, the risk is far greater for her. But, still, there are moments when I wonder - is our stories going to work together? Will they gel so that when the reader gets their hands on it, will it form one story?

But so much of our relationship has been based on trust. Hoping that it all just works out. We never had much to go on. But just trusting that telling the story is enough - but not too much.