A Right to Know, No?

A couple years ago a big kerfuffle broke out in my original mother's family when one of her brothers emailed me this picture on my birthday: 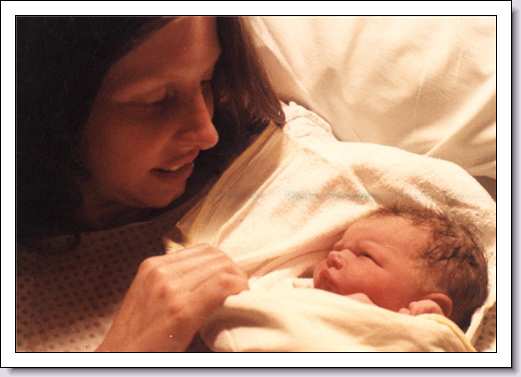 It was actually a very sweet email that included family photos and history and humor. I was touched, as I always am, when members from my birthfamilies reach out and treat me as their own.

When I saw this picture, it stopped me in my tracks for just a moment. But then I knew it couldn't be me, that it must be my sister, and I left for the weekend. When I came back and checked my email, there were a couple dozen heated emails between Kate's siblings. The gist was basically that it should have been obvious that it wasn't me, that my birth was a secret affair. Re-reading those emails tonight still makes me quiet inside. Something about hearing about my birth and the switch from one family to another makes me step back and observe, not wanting to participate in the discussion.

It might seem strange that I wasn't more upset or upended by seeing this photo, but I had come to take for granted that there is no record of my coming into the world. At least, not one that is available to me. I was so used to NOT knowing, it wasn't something I questioned.

A birth certificate. It just gives you the simple facts - your mother's name, your father's name, when you were born and where. A record that gives you proof that you came into the world. It must be important if the government thinks it is something that should be tracked, right?

I grew up not knowing my ethnicity, my history, my roots, my inherited past. It was implied that it wasn't my right to know. That it didn't matter. That my life began when I was adopted.

Thing is, my life began before I was adopted, and I still have no history or record of it. That I now know the facts about my birth and have a good relationship with both my birthmother and birthfather and that they don't want anything hidden from me gives no weight to me getting my birth certificate.

It is so engrained in our society that this somehow makes sense, that a lot of people don't question it. I try to imagine telling non-adopted people that they have no right to know who they are. I imagine that the pictures of their birth, the stories about it, the facts about it are all sealed away. I imagine they are only allowed to know from when they were two months old onward. They don't get to know who their parents are, where they were born, when they were born. That they are forbidden from having that information. Forbidden. When I think about it that way, it seems really bizarre. Of course you have a right to know who you are.


The story of how we came into the world is one of the most fundamental stories we tell our children, one they never tire of hearing. I think one of the reasons is because we, ourselves, can't remember that moment. Having proof gives us security that we really exist. Because, really, when you're told that your birth is forbidden information, it kinda makes you start to feel like maybe there's more to it. Maybe you're an alien. Maybe you weren't really born. I know, it's not logical, but neither is hiding someone's identity from them. You can't just toss someone into a new family and say, "this is your identity now" like a baby witness protection program. I was born (I think - there's no evidence). I just want the facts about it.

Now, when I look at the picture above, I don't feel indifferent anymore, I feel angry. I am being told I can't have that, I can't have a record of my birth. I feel like going all 'Borne Identity' and fighting for the right to know who I am. I deserve to know and no one has the right to tell me I don't.