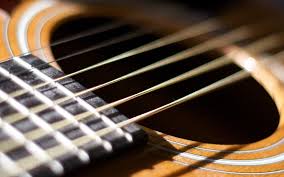 A couple weeks ago, I had planned to go over to Kate's to write and her husband, Steve, had offered to give me a guitar lesson first.

I have been on and off with learning guitar for years. I've wanted to learn from the moment when I was 18 that I found out my birthmother was a musician and that her main instrument was guitar. I hoped to unlock an unknown talent in myself and to have something that linked me together with my birthmother.

It's been 25 years since we've met, and I haven't gotten to be "good" at the guitar yet. I can do a little, very little.

Kate's tried to show me some things. At one point many years ago I asked her to give me lessons but despite a few attempts, it didn't quite work. Maybe there was too much weighing on the lesson - the burden of what I'd lost from adoption and what Kate had lost in me wrapped up in music. The loss in the room was much louder than the music.

But, with Steve it's different. He makes it easy, fun, utterly unintimidating. He put the guitar in my hand, said, "do this," and I watched him and then followed along. Kate was there, making dinner, listening along. Being part of it, but a step removed. And I didn't have to think about loss and the heaviness of music for me because I was too busy trying to keep up with the lesson.

Steve has been a support to us since before he and Kate were together. He's always been rooting for us and doing what he can to help us along. From his perspective, there is just love, and he wants to do what he can to break down the blocks.

Then again, he would push a guitar into anyone's hands and tell them, "do this," and have them following along. That's one of the things I love about him.

Sometimes with reunion we may need something from the other person that we can't get due to emotional roadblocks that get in the way. But maybe we can still get what we need if we approach it from a different angle and get help from those supporting us through it. "Do this," they may say, and all we have to do is follow along.