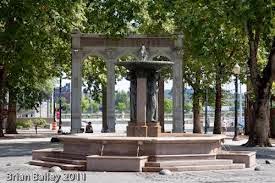 A week or so ago, I dropped my car off at the mechanic's close in on East Burnside. The bus was going to be awhile, so I decided to walk a few stops. I came to the Burnside bridge and it was such a perfect summer day, I decided to just walk the rest of the way to work.

As I came to Skidmore Fountain, I was struck with a visceral memory of first coming to Portland. Kate brought me there on a weekend to the Saturday Market. I remember standing in the area of the fountain with the street performers competing for attention with the art booths selling everything from crafted wooden boxes with secret compartments to large panels of batik fabric to handmade pottery to duct tape art. I walked up to the fountain itself, the noise of the water tumbling from the upper bowl held by three bronze women to the larger base below mixing in with the sounds around me. Messing around by the side of the fountain were some Portland street kids, where it's unclear whether they're homeless or just appearing that way from their excessive piercings and tattoos. Although dressed as tough, they seemed less threatening than a majority of the normal people I would walk across in New Jersey.  The green of the trees framed the plaza, the Willamette just beyond the trees. 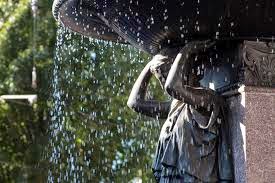 I was swept up by the energy of Portland at that moment. I felt enchanted and charmed by the city. I had come from New Jersey knowing nothing about Oregon and even less about Portland. You have to understand, people from the New York City area live in such an insular way, its like there's no world outside of itself. It's not a question of why you would ever live somewhere else, it more like that the rest of the world doesn't really exist. So discovering this place, alive with a creative, cheerful energy emanating from its center, pulled me right in. I wanted to know everything  about the city then, explore everything it had to offer, get swept up in the energy around me.

That memory of being at the fountain with Kate in my first days of Portland, made me realize how inexorably intertwined Portland has been in the story of my reunion with Kate. As a twenty two year old, just graduated from college, I was ripe for discovery. I had come from the other side of the country to discover not only my birthmother, but who I was and what I wanted from life, including where I wanted to live. Although I'd planned on a year or more of traveling, once I'd met Portland, I felt all I needed to discover was right here. 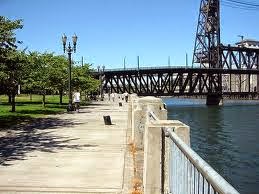 As I walked along waterfront park, my mind scrolled through all the places in Portland that were meaningful in my reunion with Kate from having lunch in one of the city parks, to going to a concert at the zoo, having a glass of wine at the Vat, stopping in at Artichoke Music on Hawthorne, or the many nights of music at the East Ave.

It's so vivid in my memories, and so meaningful to our story. As I turned up the hill at Market Street, heading towards my office building at PSU, I smiled thinking about how I still don't take Portland for granted. I am still charmed and enchanted, whether running down the street with the kids to cheer on my husband during the Naked Bike Ride, or sitting on the corner of Hawthorne drinking coffee and listening to a busker playing an electric cello and still looking like a street person, or having a tree-lined park dotted with fountains alongside the river, already buzzing with a cheerful energy on a weekday morning as I walk to work.

I walked to the center of the PSU Urban Center, with its fountain rushing over, splashing to the base below. The door to my building behind me, I took a moment before going into work, wanting to be part of the moment in the plaza, so happy to have found this place to call home.