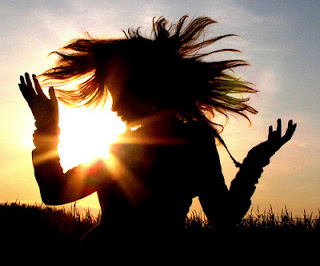 Kate has been reading a book on indigenous cultures and so came up with the idea about blogging about what is "indigenous" to each of us.

What is first comes to mind in what is indigenous to me is Jersey, and not the Native-American past of the true indigenous New Jerseyans, but it is my birthplace, my homeland, and is so contrary to my personality and yet so rooted in who I am, that it is profound to me.

I was thinking about it a lot this week because I started a new job and the people there are so nice, it befuddles me. Although I'm mostly a "glass is half-full" type of person, I can't help but wonder if the other shoe is going to drop and that somehow this new job isn't nearly as wonderful as it seems to be.

I realized that part of my hesitation comes from growing up in New Jersey vs. Portland. For the most part, in New Jersey, you assume the worst in people and then allow yourself to be surprised if they turn out to be okay. It's a defense mechanism, you're always on guard, alert, ready to react. I was reminded of a time when as a young teenager, I was walking in my neighborhood. It was daytime, and I noticed a parked car had its lights on. Knowing the person would be bummed to come out to a dead battery, I rang the bell of the house that the car was parked in front of. A 20-something hispanic man in a sleeveless tee-shirt filled in the space behind the locked screen door, greeting me with a threatening, "What?"

"Oh," I stammered. "I was looking for the owner of the car out front..."
"What of it?" he said, jutting his chin toward me and stepping closer.
"Well, the person left their lights on, so I just wanted to let them know..." I trailed off.

The guy turned toward the car and instantly he transformed - his shoulders dropped, his face softened, his eyes opened wide. "Oh, thanks!" he said, and went from this threatening presence to just a normal guy.

Only, the threatening presence is what is the normal first approach in Jersey. As the girl who goes up to strangers to tell them when they leave their lights on, this Jersey approach is obviously not my nature. Although that experience didn't dissuade me from trying to be nice to strangers, it's made me over-the-top appreciative when someone is nice to me.

So a couple years later when my Thunderbird ran out of gas and a guy came out of his house to help me out, I brought him an ice-cream cake the next day as a thank you. He raised his eyebrows and said it really wasn't necessary. I just smiled and silently disagreed. Just the week before, my boyfriend's car broke down and we went door to door to borrow a phone, and it took us almost an hour before we could find anyone willing to help us.

For me, my Jersey girl side is what is indigenous, where as who I am by my birthfamily, seems secondary. Even though that was always a part of me, I didn't realize what came from my birthfamilies until later so that side seems new.

to view my birthmother's blog on the same topic, go to: http://mothertone.wordpress.com/