When I was a boy 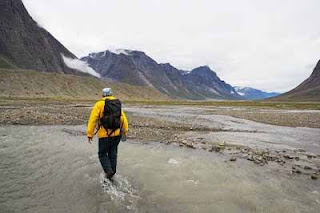 (Inspired from a writing workshop, of an essay that started with "When I was a boy...")

When I was a boy, I wanted to see the world. Bit by bit, it happened. In 1981, at the age of ten I flew with my mother from our suburban square home in Parsippany, New Jersey, to an unmapped life in Portland, OR. She, leaving her husband by choice, me leaving the only father I had known, in confusion.

In our first apartment of many, my mother divided the middle room with a batik curtain so that we could have separate “bedrooms,” my bed being a bunk over the piano across from the desk. She started playing guitar at Irish music sessions in a dark loud bar called they called the East Ave. I would do my homework at the booth while she played. At home, I would drift off to sleep while listening to the music being played by my mother and her friends on the other side of the wall in the kitchen: guitar, fiddle, bones, bohran. Sometimes waking up from their laughter deep in the night, and being late to school the next day.

I spent my adolescent summers drifting around, smoking pot, hitchhiking. I found my way to Fairbanks, Alaska, living on my own at the age of fifteen, more or less – I stayed on the couch of a friend of my mother’s, Tim, whom she had contacted when she found out where I was. I would spend my evenings in the “Buffalo Nickel” a smoky bar near Tim’s house. I think the staff let me hang out there, even thought I was underage, because they knew I had nowhere else to go.

Growing tired of the cold and the dark, I hopped in my friend’s truck one day without having planned to, and four days later found myself in San Diego. The sun felt strange on my naked skin after its year-long hibernation under layers of clothes. I noticed I could still taste the salt on my lips hours after coming out of the ocean. Doing nothing felt like a good day’s work.

I had always played music. I wrote my first song when I was three and could play guitar by five, though I hadn’t had any formal lessons. So in San Diego, I started busking for money on the corners by the beach, where the tourists would be passing. I made enough money to keep me going and had enough left over for drinks that night at the session. I would find my way home to Portland, maybe even to Jersey – sometime – but for now I would see where the world led me.

But that was when I was a boy. That was the life that may have been, had my life been what my birthfather was told: that my mother had me, that I was a boy, and that she married someone else. My birthfather worried that the husband may have thought the baby was his. So any thoughts of seeing the baby again were relinquished and he was left only with the imaginings of what my life might be.

In fact, my birthmother had me, but I was a girl, and she didn’t keep me, but gave me up for adoption. She did get married, so soon after my birth that her breasts leaked milk in her wedding dress. But her husband, Bob, had known the baby wasn’t his. He had told her she could keep the baby, but she had decided already and kept with her instinct.

Had my life been the life told to my birthfather, I imagine I would be much different than I am today. I probably would have been more confident in my creativity. I would have grown up surrounded by musicians and artists; rather than by my adoptive parents, who appreciated art from a distance. I would have been playing music from the beginning, naturally, rather than taking piano lessons but giving it up because I never felt able to make it my own.

I do, however, imagine I would be less confident in other ways had I been raised in my “birthfamily.” My adoptive family had the stability of a two-parent home in a square house on a square lot in New Jersey, one house my whole life. My dad worked as a chemist, my mom as a homemaker, with dinner on the table every night at 6pm sharp. College was planned for and paid for. I was brought up in the certainty of being loved and wanted and accepted. Certainly, that brings gifts not easily defined.

But what is hard for me to imagine is the two me’s – the boy who plays music on the beach and the girl quietly writing alone in her room – being, in fact, the same person.