A daughter by any other name is still a daughter, but what about a mother? 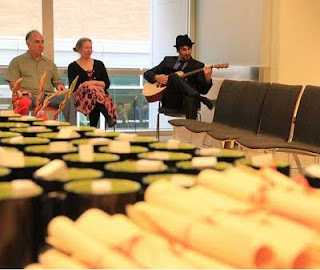 This week my birthmother, Kate, came through in a big way. After too much caffiene, I had the "brilliant" idea of coercing all of the faculty and staff in my engineering department into doing a big ukulele performance at the end of our department's graduation. The idea wasn't totally crazy - one of my staff guys is an amazing musician and has already performed songs at previous graduations, while Kate and Steve's (her husband) schtick is to teach ukulele to non-musicians. Kate and Steve had 26 ukuleles they could lend us, Jay could sing the song, it was a vision.

The next day when the coffee had worn off, I had started to rethink the idea. But, by then, my wonderful staff had bought into the idea and supported me through it. Two weeks later, Jay (the staffer musician) had written the song, the rest of the staff (women) co-ordinated a simple dance routine and the faculty were told they were going to be given ukes to play and offered lessons from Kate and Steve to get them ready for it and that was that.

This was the result:
http://www.youtube.com/watch?v=vv7kb_vfQZ8
(I'll try to get a better video up soon. I'm the one in the white dress, and Kate and Steve are on the far right standing and playing ukulele)

Kate was wonderful. She and Steve drove 2 hours down from Olympia the day before to bring in the ukes and do a rehearsal (that I had gone back and forth on). When they got there, I was stuck with how to introduce her and Steve. Most of the people I work with, the ones I talk with regularly, know my story just from it coming up in conversation. You would think by now we would have it down, but when the time came to introduce Kate, I choked.

Earlier in reunion, I was braver. Twelve years ago, when I had a work party at a bar (a goodbye party for me after a layoff in nonprofit), Kate came along. We were already sitting around the table when she came in, so there was nothing to do but introduce her and so I did - as my birthmother. Everyone was nice enough not to comment on it right then, but it certainly put an awkward pause in the conversation.

One of the women I worked with at the time came up to me later when I was alone and asked if I had said that that woman was my "birthmother." "Yes," I replied, a little too bruskly, but by then I had learned that telling the story tended to "sensationalize" it to the listener, even when we were friends. It became marginalized either into a sweet romance of sorts - finding each other again - or a tale of adventure and danger. And while it is all those things, there's a lot of crap in between that's dark and fuzzy and hard to explain to someone who hasn't been though it. So I braced myself for her asking me my story.

It turned out she was an adoptee too and newly in reunion herself. From there, I was the one hooked on her story. It was the first time I could talk to someone so freely and openly about the whole experience and have her understand me instantly (in "shorthand" a therapist who saw both of us in an "adoptees in reunion" therapy group, called it later). So, I was glad I had introduced Kate as my birthmother.

Even though I may have been braver back then, with the fire of first learning about adoption issues lit under me (I had just started reading Betty Jean Lifton), but it was a selfish bravery. Me introducing Kate as my birthmother didn't say much about me that people could judge me about (other than that I was in touch with my birthmother) but now I realize, after getting to know Kate and her experience more, that it gives people a lot to judge her about - being a mother that chose to relinquish a child for adoption carries a heavy stigma with it and introducing her with that in front is very exposing.

Still, it seemed unfair. Kate could (and would, frequently,) introduce me as her "daughter" and have that be perfectly valid. You can have many daughters. Even if you give them away to be raised by another family, it is still your daughter. But, mother has a whole weight on it that's different. I talked about it a bit in the "Mother's Day" blog earlier. I can't just call Kate my "mother," I only have one. But, birthmother, that seemed to work for me, for us. And, without better words, that's what we've stuck with.

And, if it's unfair that Kate can introduce me as her daughter without issue being raised ("she's not my mom," I would retort silently in my thoughts), it's also not fair that I can't introduce her as my birthmother and it automatically raises issues and questions. A few weeks ago, we went to the beach, just Kate and I, for a weekend to ourselves in celebration of my birthday (more to come on that soon), and, again, Kate would introduce me as her daughter and I would just evade questions about us. It's strange, but there's no good way around it.

But there's one thing that's significant. Early on, I would think of her her as my "birthMOTHER." Now, I almost always think of her as my "birthMOM." I've gotten comfortable enough to go from mother to mom with the growth of our relationship, so I think that says something, even if it only makes sense to the few of us who stuggle with this.